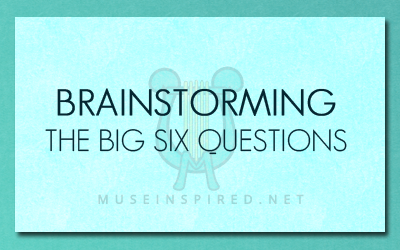 Let’s assume that you already have an idea for a story. A really basic idea. You just have no idea how to expand on that idea. What you need then is a little bit of plot brainstorming. I like to call this plot bunny breeding! You’re taking your core concept and then breeding tons and tons of ideas that can work with the story.

In this brainstorming exercise, think up six options for each question that relates to your plot. Weave your favorites together to create your outline.

WHO …is in this plot!

In this case the WHO will be the stars of the story. They might be a single main character, many specific characters, or background characters. Your cast of characters can bring up many different plot ideas. In a zombie apocalypse, you’re going to have different sort of story ideas for a group of high school students compared to trained army soldiers.

WHAT …will happen in this plot!

All plots need conflicts and road blocks. Stuff that is going on in the world. Your WHAT should list off a bunch of things you want to throw at your main characters. Are they being attacked by aliens? Is the country at war? Will there be love triangles? Will there be sex scenes?

WHEN …is this all happening?

The WHEN could mean anything from history of the world, time of life for the character, or timeline of events. It can also include when you would like certain plot events to happen to your characters. When you have a lot of things you want to do in a plot, you can write down the sequence of events, and even create more plot ideas on how those events connect together.

WHERE …is this going to take place?

Locations can have a lot of impact on the story. Jotting down lots of places for WHERE you want scenes to take place will help with ideas. Different kinds of plot twists and storylines can come out of changing up locations. Like taking place at school versus at work or at home. In a country that is at war or walking in to a tavern in the middle of the night.

WHY …is all this happening?

You won’t have a story without having reasons. The WHYs are reasons that things are happening. Two countries at war; what happened to cause this? Why are characters involved and trying to fix or fight? Those damned zombies are here, but how? Why did the aliens choose Earth to invade?

HOW …does it all tie together?

When you’re putting together a bunch of elements they need to be related and make sense for your plot. If your plot is about fighting dragons in a fantasy land, but you want to feature a scientist as a main character, you need to figure out HOW that can be accomplished. In a modern setting about Japanese high school students, you couldn’t throw in this Russian mob kid without knowing how they got there.

A lot of people get hung up because they keep having ideas, but none of them seem to work for their plot. Don’t give up or be discouraged if the perfect idea doesn’t come to you right away. Sometimes you need to ramble out a bunch of random nonsense before you hit inspiration. With brainstorming, you are getting your brain in gear to help you find that perfect idea. Where one thing doesn’t work out, you may come up with something even better!

Diana Calloway
Diana participates in many writing and community projects, including co-authoring the Silent Pines novel series and creating random generators at MixVixen. When she isn't herding cats and creating dinner out of nothing, she loves painting colorful owls, gratuitous amounts of glitter, and making themed music playlists.

Latest posts by Diana Calloway (see all)
Share us on Social Media!