The Tarot has been around for centuries. Originally it was a card game played for fun, but over the years the cards took on beautiful symbolism and meaning as artists brought to life their own decks. These days the Tarot is a tool for divination, insight, and for our purposes… inspiration! Using Tarot cards to tickle your muse is as simple as picking a card out of the deck at random. Each card often has a background story, symbolic imagery in the art, as well as traits associated with the card. You can draw from these things to develop the personality of a character, a struggle or consequence they may be facing, or even ideas for journey your character might take.

Don’t have a deck of your own? Use MixVixen’s Tarot Card Generator! 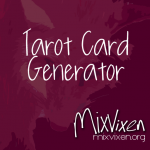 Dive Deeper in the Meaning of Tarot Cards: 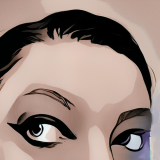 Diana participates in many writing and community projects, including co-authoring the Silent Pines novel series and creating random generators at MixVixen. When she isn't herding cats and creating dinner out of nothing, she loves painting colorful owls, gratuitous amounts of glitter, and making themed music playlists.